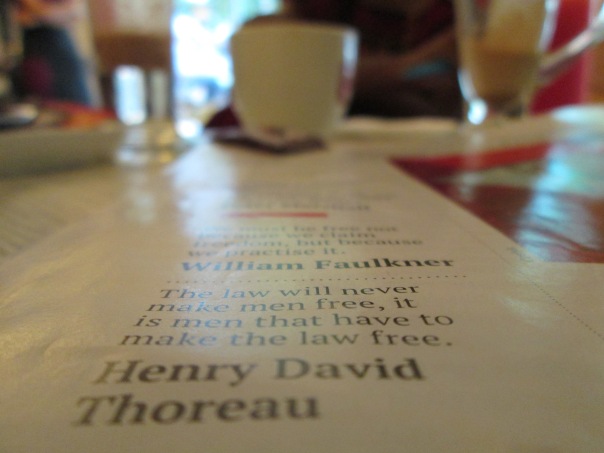 the law will never make the men free; it is the men that will have to make law free!!

She stood in front of the mirror, naked. She looked at her breasts. This was the biggest they had ever been. But she knew that they were going to get bigger. She stared at herself for a long while before she ran her right hand across the entire area of her belly, from just above her abdomen, all the way down to its lower end. It looked bloated and the bump had begun to show through her clothes now. She was five months pregnant, and had just received her scans from her gynecologist. She had dreaded this moment would come right from when she turned into a teenager. And 15 years later, she still wasn’t prepared for it.

“You are going to have a healthy and beautiful baby girl. You just have to keep eating healthy, and get good sleep and sufficient exercise, just like…

On the occasion of Teacher’s Day, I would like to share a classic story that I adapted from the Nobel prize winning poet Rabindranath Tagore, in which he warned us of the dangers of McEducation almost 80 years ago. In ‘The Parrot’s Training’ , we are told of a golden cage that is built to imprison the wild and uncivilized parrot so that she can be properly educated by the king’s pundits. In addition to the 3Rs, she should also learn who is ‘the boss’ as well as be familiar with all the latest global brands.

First, the teachers tried stuffing the bird with pages of the official textbooks. That did not work. Then a UNICEF project came with all kinds of child-friendly and joyful techniques for the girl-child parrot. They also taught the parrot about child rights. No improvement. Then the World Bank gave a loan to the king (with austerity conditionalities of course) to build a bigger cage with a nicer toliet. Still, no difference. Then the OECD came with the PISA standardized tests and new a national policy white paper was written. Harvard researchers were invited to conduct studies on the parrot’s brain and multiple intelligences. Nothing worked. Then Apple gave it an iPad, a free high speed wifi connection, and links to Khan Academy. She even got her own facebook page. But the parrot was not allowed to leave the cage despite her obvious distress. In fact, she was scolded for being ungrateful and impertinent. Then she was given mindfulness training. No luck. Finally, anti-depressants drugs were prescribed. As the parrot was overstuffed with information and tormented by the pressure of competition, she internalized her label as a ‘slow learner’ and ‘failure’, and lost confidence in her gift of flight. One day the cage was accidently left open but she was afraid to venture out. She was diagnosed with NDD (nature deficit disorder). The parrot became totally dependent on the cage. Her dreams were reduced to being a rat in the rat-race. A deep loss of purpose ensued. Slowly her spirit withered away. In the end, a lot of people made a lot of money on the parrot’s education, everyone benefited except the parrot.

The time has come to more deeply understand the nature of the cage and its impact on each of us and our communities in both the South and the North – beyond what the World Bank economists tell us. It is important for teachers around the world to crack open and re-examine our definitions of progress, success, happiness and to look at how our imaginations for creative social action have been colonized by the cage.

We also need to question the assumption that, if we keep adding more and more bells and whistles onto the cage, we can actually fix or reform its fundamental nature as an institution built for control and domination.
– Manish Jain, Shikshantar Andolan 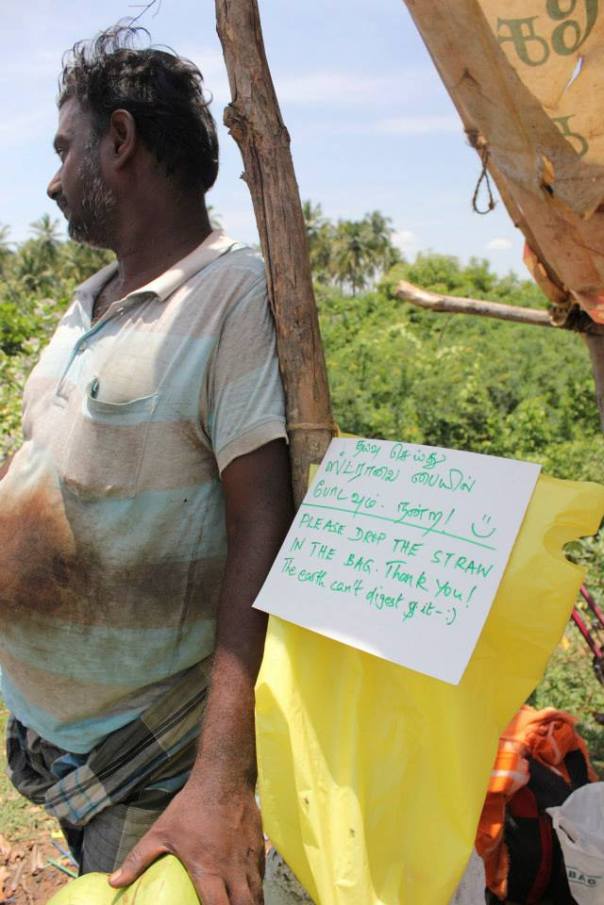 We were driving by this tender coconut shop, asked him where do you dispose your straws which are lying here and there, he said we leave it here. When we explained why they shouldn’t leave it there and gave him a bag to to dispose it in, they took it. =)

There is a time in one’s life cycle..when there is a great need to be loud, since one was pushed to the corner by repression, suppression, loneliness, born of ignorance. So what Lao Tzu said..”be like nature and express fully. Then be silent,” holds true. There comes a time when there is a greater need to be secretive and quiet and almost reclusive…This reclusive phase is not born of depression or suppression..but born of reveling in one’s lovely solitude..that is born of knowing..”Now I am self reliant and can take care of whatever rises inside me..as all is now welcome and joyful…the fury, the rage, the sadness, the passion, the urges, the desires, the ecstasy, the aloofness..all of it. Now I am one with nature…earlier I thought I was separate.” I feel one can be truly oneself only in anonymity..provided that anonymity is not born of shame, fear and guilt..But…

We are grateful to discover our right work and happy to be engaged in it. We embody values and practices that offer us meaningful lives now.
We let go of needing to impact the future. We refrain from adding to the aggression, fear and confusion of this time. We welcome every opportunity to practice our skills of compassion and
insight, even very challenging ones. We resist seeking the illusory comfort of certainty and stability. We delight when our work achieves good results yet let go of needing
others to adopt our successes. We know that all problems have complex causes. We do not place
blame on any one person or cause, including ourselves and colleagues. We are vigilant with our relationships, mindful to counteract the
polarizing dynamics of this time. Our actions embody our confidence that humans can get through
anything as long as we’re together. We stay present to the world as it is with open minds and hearts,
knowing this nourishes our gentleness, decency and bravery. We care for ourselves as tenderly as we care for others, taking time
for rest, reflection and renewal. We are richly blessed with moments of delight, humor, grace and joy.
We are grateful for these.
SO FAR FROM HOME: Lost and Found in Our Brave New World Margaret J. Wheatley Available online and in bookstores everywhere

Ram was a 10 year old boy in a traditional middle class Indian family. He loved painting, reading, cycling and photography. One day he was looking at himself in the mirror while taking a bath. He noticed his penis, he didn’t exactly know what it was, he knew that he peed using it, but why did he always have to cover it up? Curious, he started examining it, his mom walked in, she was startled, she said “don’t touch it, you dirty boy!” He wanted to know why his own body part was considered dirty.
One day in class, he was wondering if even girls had similar body parts as his. He remembered once he had gone to the swimming pool, he had noticed that it was flat on the girl unlike his part. He was very curious to know, so, after class he had asked one of the girls…

Sitting in the middle of the road,
with my ears plugged to the pod,
with a book and a pen in my hand,
waiting for someone to come,
it feels like the time has stopped,

What a crazy life these people live,
in a very crazy rat race they thrive,
someone throws out a can of coke out of the car,
a police man throws a lighted cig on the dry leaves outside the bar,
a van with 2 leaves on a flag parked in the middle of nowhere,
blocking the traffic everywhere.

It’s in my hand,
it’s my responsibility to not do such things because it seems insignificant,
and also to try and stop the people who are doing it,
yes we are going to struggle a bit,
it happen if we want it to,
yes, I am the change!